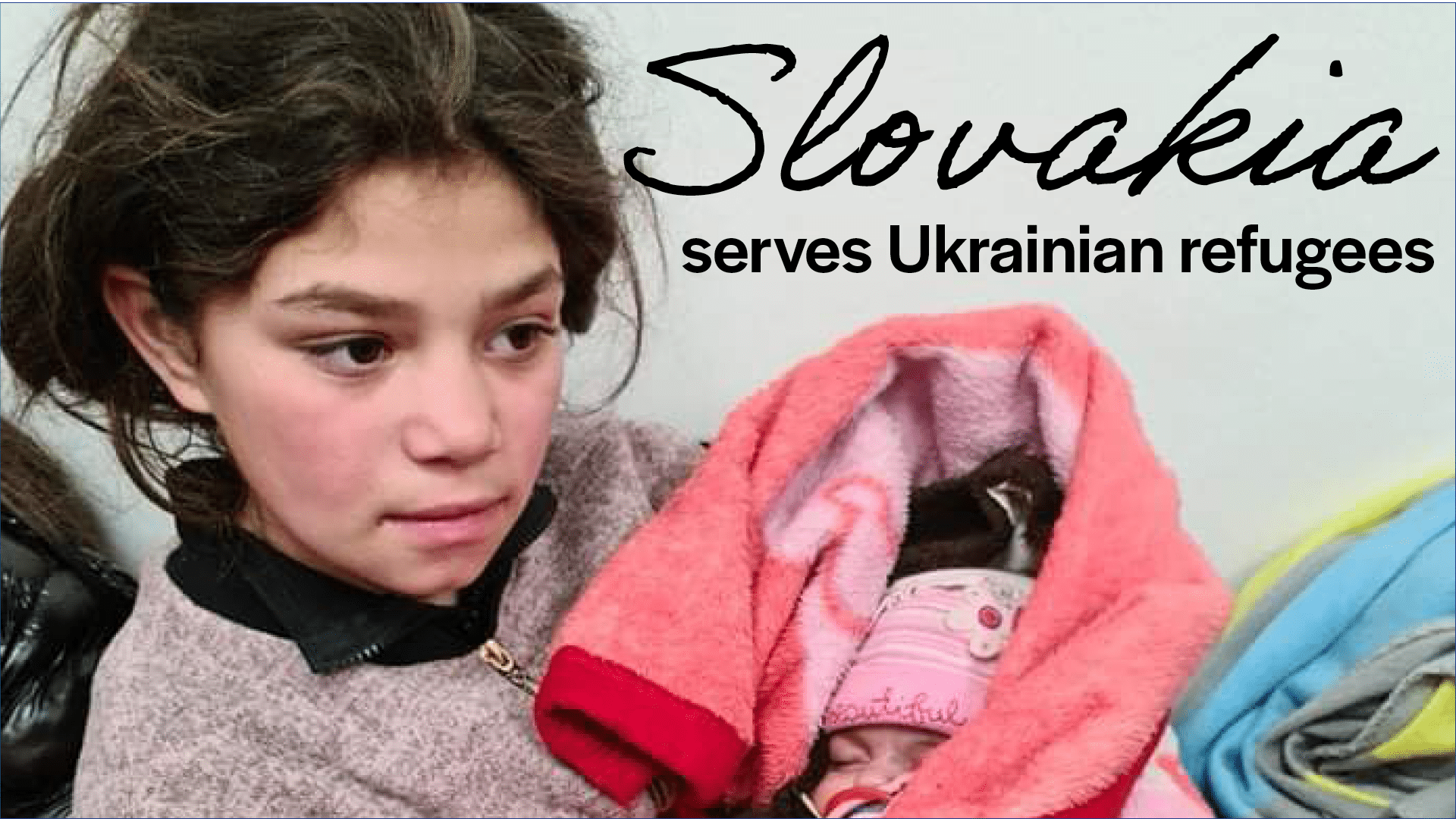 Slovakia shares 60 miles of border with Ukraine, meaning it has been a first stop for more than 200,000 refugees since the Russian invasion.

As a first wave of refugees has moved through, a second wave is arriving … with little idea where to go next. These include thousands of Ukrainian Roma people who are connecting with eastern Slovakia’s large Roma population. Once only on the receiving end of humanitarian aid, now Roma churches in Slovakia are enthusiastically providing help to others.

But before we tell that story, let’s back up a step or two.

First Free Rockford has enjoyed a long relationship with Cirkev Bratska (Church of the Brethren), a sister church of the EFCA in the east Slovak village of Hermanovce nad Topľou. First Free missionaries Pierre and Lisa van Vuuren serve in the area, with the Bible translation organization The Word for the World.

Cirkev Bratska has a dormitory, and has been housing Ukraininan refugees since shortly after Russia invaded Ukraine on Feb. 24. Lisa writes:

Sunday, Feb. 27, the church was already preparing to receive refugees. The kitchen was stocked with food and piles of clothes were arranged and laid out on side tables in the fellowship hall. Early that week the first group of 16 refugees arrived—members of five families from a church in Hostomel, north of Kiev. Hostomel is next to a military airport where Russia first attacked. In answer to prayers, more of their family members have since arrived—women and children. Men 18-60 have to stay to fight.

Two brothers were in the first group; their parents are still in Kiev, and they’ve heard that their home has been destroyed. One of the women who arrived with her children in the second group had been sheltering with her children in a basement. When shelling stopped for five minutes, they dashed to a car to escape. When they looked back, bombs had fallen where they’d been sheltering. When she arrived, she was so traumatized she could hardly speak. …

With the arrival of the refugees, our pastor decided to have a joint Slovak-Ukrainian prayer meeting (on March 4). After singing several praise and worship songs in Slovak, one of the church members suggested singing a song that they know in Ukrainian. The words were quickly found and displayed on the wall. The Ukrainian faces lit up as they sang in their language. I was reminded that language is the root of culture, and that for them singing in Ukrainian would not only show unity, but recognition of their country—a country that Putin said was only an “invention” in his speech rewriting history before his invasion.

The early refugees didn’t stay long in Hermanovce. Many were on their way toward friends or relatives farther west or north: the Czech Republic, Poland, Germany and beyond. The Hermanovce pastor, Marek Jurco, set up a WhatsApp prayer group for the church, asking that members pray for those who came and left, that these “short meetings would not only help them with practical needs, but also that God’s Spirit would use the meetings to bring the hope we have in Christ into their human hopelessness.”

A second wave of Ukrainians is now streaming into Slovakia and the other countries neighboring Ukraine—people with no contacts and no known destination. This wave includes a Ukrainian population familiar to eastern Slovaks: Roma people.

The Roma have been in eastern Europe for more than 1,000 years, but they have been a population marked by poverty and dependence, and marginalized by racism. Pierre and Lisa work with the Roma people, with Pierre helping lead a team translating the Bible into the East Slovak (Carpathian) Romani language.

Now, as Ukrainian Roma people have fled the war and reached the border, neighboring countries have often turned them away if they don’t have someone meeting them there. Marek Olah, part of the Bible translation team, is a pastor at a Roma church in the town of Sabinov. When he and other Roma pastors realized how Roma were being shunned at the border, they mobilized their churches to house and feed as many as they could.

“We go and pick them up at the border and bring them to our churches,” Marek said in a Zoom interview. “Many times they have had bad experiences, so they feel safe coming to us. We as Roma can serve Roma the best. We know the mentality and we know the language . There is no barrier, so it’s easier.”

Hermanovce does not have a Roma community, but the church sponsors three additional “preaching stations” in its area, including the Roma church in the nearby town of Hlinne. This week, the church is helping the Roma church set up temporary housing for Ukrainian Roma refugees. Lisa writes that plans have been started ranging from details like where to buy mattresses to contacts who can help transport people from the border, about 55 miles away.

On the bus ride from the Ukrainian border to the Roma church in Pavlovce, Slovakia, families received Roma-language New Testaments. Photo: Marek Gombar

When cultural barriers are down, barriers to understanding recently translated Scripture come down, too. The Ukrainian and Slovak Romani dialects are closely related—meaning that some of the Ukrainians are encountering the Bible for the first time in a language very close to their own. Marek even brought out a small TV one evening and showed the LUMO film version of the Gospel of Mark. The Ukrainians recognized the voices, because Marek and others in his church were the ones who had recorded the Romani audio tracks.

Every caring word and action has not only served the Ukrainians, but their suffering and faith have also spoken loudly to their new Slovak friends.

First Free’s Global Outreach fund supports these efforts through its support of missionaries Pierre and Lisa van Vuuren. Please pray for the Hermanovce church including its refugee ministry to the Roma refugees, and for the van Vuurens.

For information about the separate, special offering being taken this week for our sister church in Ukraine, see last week’s story.