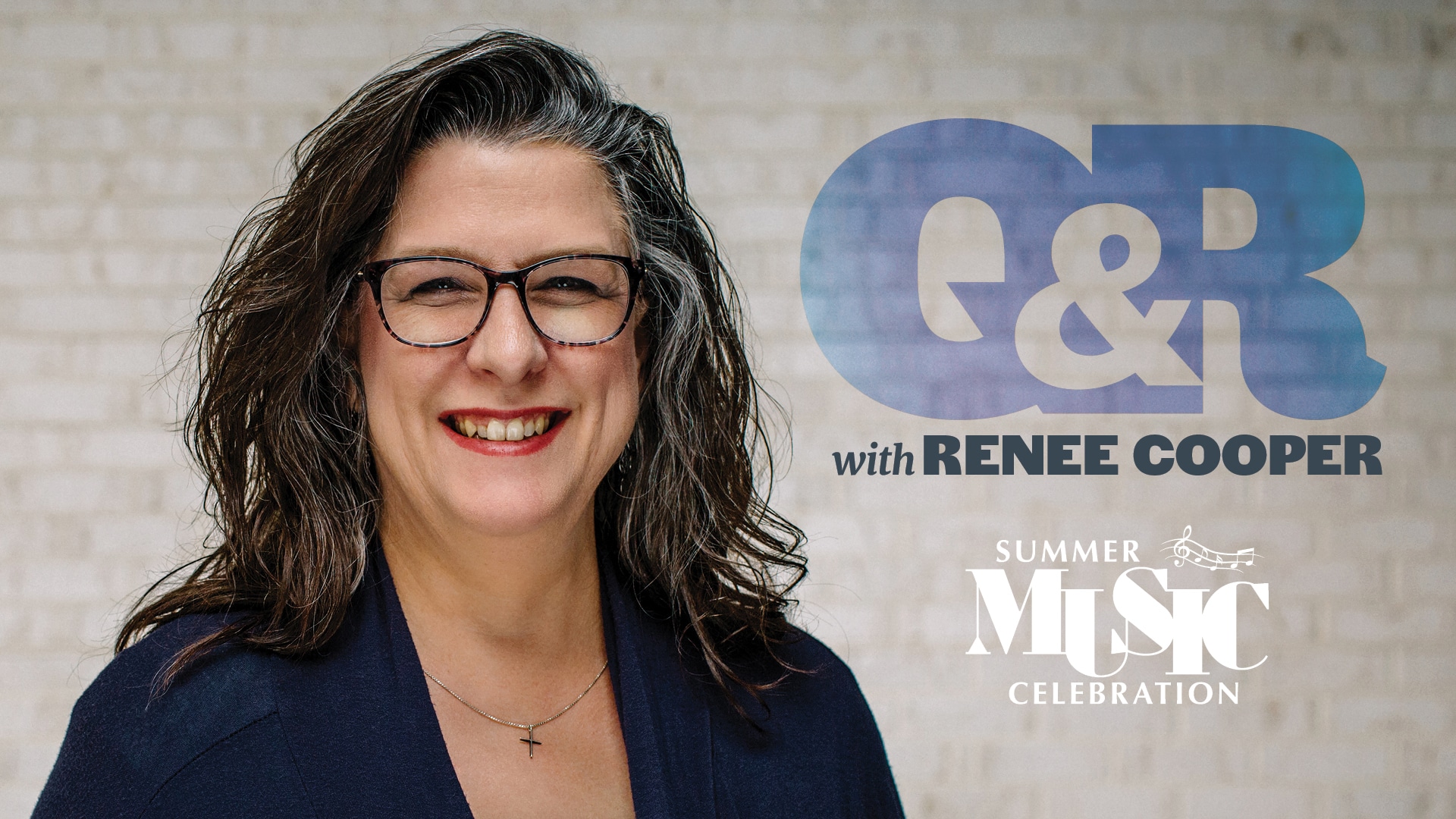 As First Free’s Classic Worship Director, Renee Cooper also has directed the choir and orchestra for our annual summer concerts. 2019’s concerts were our 50th year. They’ve been directed by Bruce Erickson, Otis Skillings, Doug Thiesen, Kristyn Thor, Eric Walker and Renee — who this year directs for the 16th year. Most recently called the Patriotic Celebration, the concerts begin a new approach this year. We spoke with Renee about the change, and what attendees can expect in the two performances Saturday, June 26.

A lot of people have known these concerts as the Patriotic Celebration, but that’s not the whole history, right?

The summer concerts have been going on since 1970. Bruce Erickson started them down at the Sinnissippi Music Shell. When he started, he would have different themes every year. It was called the Summer Music Festival, because they would do at least two nights down there. It almost always included some patriotic elements, but the whole theme wasn’t patriotic.

When Otis Skillings was here, there were several summertime events with the choir and orchestra out at Summerwood, including a patriotic event. And then in 1990 when Doug Thiesen came, he named it Patriotic Celebration and kept it solely patriotic. And that was the one big choir-and-orchestra concert out at Summerwood each summer.

So it was called the Patriotic Celebration from 1990 to 2019. What prompted the change in theme for this year?

We did our 50th event in 2019, and then of course 2020 threw everything off and we weren’t able to do a program. So we just thought this might be a good time to re-evaluate, reimagine a little bit, kind of broaden the scope of what we can do in the concert and not be so limited by the idea that we have to do ‘Patriotic.’ We still want to honor our veterans and our military, so we will keep that as a portion of our program each year. But planning the whole program won’t be us trying to think, OK, what song haven’t we done every year for the past 40 years?

We can be more creative now. We aren’t in the box of, You have to do these songs and it has to be this theme. Every year now, we can do a different theme. This year we decided to focus on hope, the hope of Jesus. He has always been our hope and he always will be our hope — the only hope we have.

Tell me more about that. What prompted you to go this direction thematically for this year?

Just all the chaos in our world. Not only covid, but all the political unrest, the social unrest, the fighting, misunderstanding each other, not even listening to each other sometimes. All of that. It gets so tiring. And people do feel hopeless at times. And so, we as the church have to tell people the truth. Their only hope is Jesus. If you don’t have Jesus, this world is going to let you down sorely.

So that’s how we came to this. As a production team, there are five of us who meet and brainstorm. So our first brainstorming meeting was, “Let’s mix it up. And let’s tell people where the true hope comes from.”

You are doing a few spirituals this year. What went into the decision to feature that musical style?

A lot of the spirituals stem from oppression and hardship, and looking forward to the hope of heaven. And so we thought, we’ve used some of these in our Patriotic Celebrations in the past. People who have come before will be familiar with some. But a lot of spirituals are well-known anyway, or they will be recognizable. So it’s going to be music that people will recognize, but yet still talks about the hope we have in heaven and not getting caught up with everything that’s going on in this world.

How have the choir and orchestra taken to this? You haven’t all been together for quite a while.

They were so excited just to be able to get back together and sing. We started short rehearsals in January in small groups, with only 20 people at a time and spread out in the choir room. Those were tough rehearsals, but it still was so good just to be back together.

And then just the thought that we weren’t able to do anything. We weren’t leading in (Classic) services for well over a year. And so once we were finally able to do that at Easter, you could see how it was lifting everybody’s spirits just to be able to be back together. It’s been so hard being apart. We’ve tried to keep in touch with everybody, but it’s just not the same if you are not together. So they were thrilled when we finally got to be able to lead in the services. We’re still doing choir one week, orchestra the next, to spread everyone out a little. But after Summer Music Celebration, we are all going to be up there.

Was there any thought of having the Summer Music Celebration at Summerwood?

We did talk about it briefly. Logistically it’s really hard, especially with all of the orchestra equipment and the extra sound equipment that has to be taken out there. I know we’re having summer worship services out there once a month, but (a concert) takes a lot more than what we would use on a Sunday morning out there. And just the amount of work it is to take a 25-piece orchestra out there. Plus a piano. Plus risers for the choir on the stage. And really, the Summerwood stage isn’t in great shape. So it’s just difficult.

Not to mention the unpredictability of the weather.

It’s almost always extremely hot at the end of June. And if it’s not extremely hot, it’s raining. Our last year out there, 2012, we got rained on in the middle of the concert. They said “Oh, it’s going to pass over,” so we told everyone to just wait. But it just sat on us and would not let up. So we did half of our concert and we were done. And we were only doing one night at that time, so that was it. Half a concert and no gospel presentation. It was very frustrating.

The next year, 2013, we had done all the renovations inside, with a brand-new sound system and the platform had been redone, and so we moved inside. And we’re so thankful for that. A lot of people who come appreciate it too, because then they are in air conditioning. You’re not worrying about that oppressive heat. Out at Summerwood you’ve got the trees around the edges, but otherwise there’s no shade in there.

Did the decision affect attendance one way or the other?

We had seen our attendance outside going down every year, so that’s why we gone to just one night out there. We had 3,000 seats out there, so we didn’t need to do two performances. In 2013 and every year after that since we have moved inside, our attendance has bumped a little bit more. After the first year inside we went back to two performances.

And both on a Saturday afternoon, right?

Yes. Some of the people who come are of the older generation and they don’t want to be out after dark. So we thought, we’ll just do them both in the afternoon. You can either go to lunch and then come to a program, or you can come to a program and go out to dinner, and still be home before dark.

What do you want people to take from this event, in their minds and hearts?

For those who know Jesus, to remember that our hope is in him no matter what happens in this world. He wins. And it may not be easy here. We haven’t been promised it’s going to be easy. In fact we have been told the opposite.

For those who don’t know Jesus, that the Holy Spirit would work on their hearts and draw them to himself so that they can have that hope.