MINUTE READ
Students
Q&R with Meredith Domanico – Part 1 of 2
Summer Camp was a time of spiritual awakening for many of our middle-school and high-school students, says StudentMinistries Director Meredith Domanico. In the first of a two-part conversation about youth ministry, Meredith talks about what happened to make this camp special.
Jim Killam
July 14, 2021 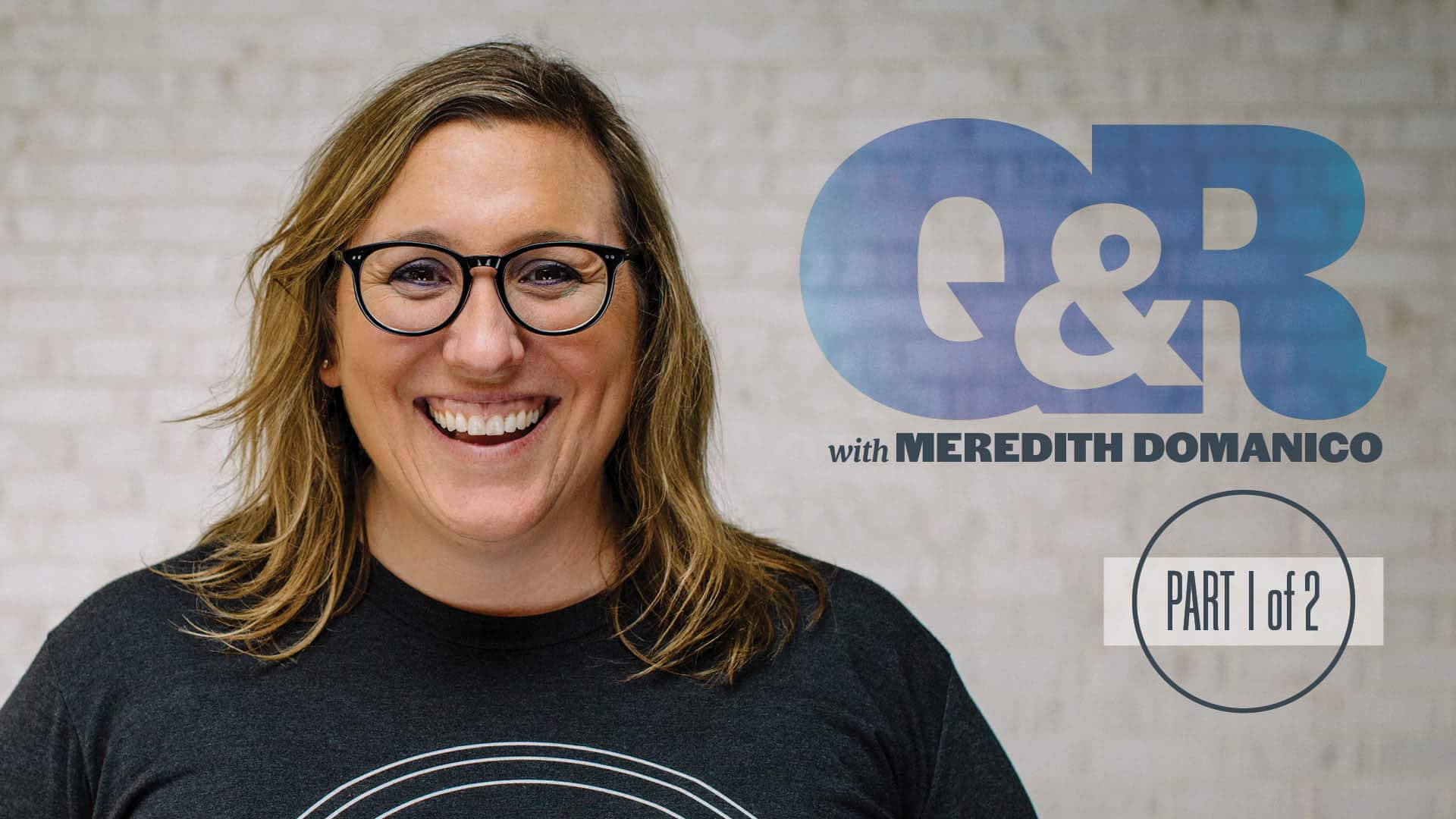 This is the first of a two-part conversation with Meredith Domanico, Student Ministries Director.

Jim Killam: You and some of the students got back from Summer Camp recently, right?

Meredith Domanico: Yeah. We were at Expeditions Unlimited in Baraboo, Wisconsin. We had students there from incoming sixth grade — so age 11 — up to high-school seniors 18 years old.

JK: That’s a huge age range. Let’s come back to that. But first — you’ve described it as a week of spiritual awakening. What good things happened?

MD: It was just this awakening of, what the church is. It’s more than programs and coming to a building. It is about the community of people. And so it was an awakening to what that community is. It was beautiful.

JK: What do you think contributed to a misunderstanding of this before?

MD: I think a few things play into that. Tradition. When you have multiple generations of people who have been in faith, it just becomes something to do. And if you don’t connect the heart with the head, when something like COVID comes, we don’t know what to do because the foundation is lacking.

I think another part that plays into it is consumeristic Christianity. Give me the programs. Give me the things to do.

MD: Right. And so when the entertaining is gone, it leaves them to figure out, “Oh, my gosh. Do I have a real relationship with the Father? Do I know what this means?” I think that shook a lot of people, because they weren’t being spoon-fed. They didn’t have programs to go to, midweek time where they could meet with their friends, their group of people. And so during COVID, when it was up to them, it was like, “Oh, well, I guess I don’t really need to do that.” They lost it.

JK: And certainly that wasn’t just students. That was lots of adults, too.

MD: Yeah. Students depend on parents so much. It was an emotional roller coaster for some parents as well. If you have parents who are going through a crisis of faith, those kids — no matter how much they try to stay connected — they’re dependent on parents as a catalyst. I heard several stories at camp where students said, “My parents just don’t come to church anymore. And it’s just really hard. I’m the only one trying to go after my faith.” It’s hard enough as it is, but then you add parents on top of it, whom they look up to, whom they love.

JK: And they were separated from other students who were helping them stay on it.

MD: Yeah. Because if you don’t have a family that’s helping you stay on it, and you’re relying on your friends who are, and then those get taken away, it’s just really difficult. And so yeah, camp was definitely an awakening of souls.

JK: What else at camp contributed to that?

MD: I think the teaching was very straightforward and very blunt.

JK: Who was teaching?

MD: My friend, Collin Nicholls. He’s from my old church. He served in the ministry that I led. For a month straight, Clayton Ganziano, Collin and I spent time praying separately about camp. Like, Father, what do you want these students to know? What do you want them to learn? And so when we all came together, to share what we felt the Father was saying, there were definite similarities.

JK: What were you hearing from God?

MD: Be straightforward. Like, “This is what it means to be in a relationship with Jesus. Don’t come here and just make some flippant decision because you’re living in this Christian bubble for a week. You make this decision, and your life changes immediately. When you go back, you don’t do the same things that you did. It doesn’t mean that you’re going be perfect. But there is a progression of dying to self.” And so, talking to them, very frankly, helping them engage in responses that weren’t just one night and that were not based upon emotions.

We kept a fire going, morning and night throughout the week. We used it as a way to allow people to respond to some of the things that we were talking about. We gave them wooden shims to write on. The point was to write down what’s been coming in the way of your relationship with God. A habit, a hurt, a hang-up, a lie. Whatever it is. And we asked, “Are you willing to throw that in the fire?”

The first night we said, “Don’t throw it in the fire if you’re not willing to make a change. Don’t just do this based upon emotions. Do we want you to throw it in? Yes. But we’d much rather have you keep it for a while and be reminded of what the Father has put on your heart — where he wants to grow you and what he wants to release you of — rather than putting it in the fire and forgetting about it.”

And so we told them they had all week to do this. It took some up until the very last day to say, “OK, I’m ready. I’m ready to throw this in.”

JK: What happened after they threw their shims into the fire?

MD: We celebrated as a community. We clapped and we prayed for them.

JK: Were there other ways you challenged the students?

MD: We asked another question: “What’s a risk that you’re willing to take this week? Because if you don’t take a risk here, when you’re in this bubble of support, then you’re probably not going to take a risk back home, because it’s going to get harder.”

So we had them think of risks. Is it that you’re going to swim? Or if you’re afraid of heights, are you going to rock climb? What’s the cost? Are you going to meet a new friend or engage more in worship? What does that look like?

We had paper receipts with carbon copy. They got to keep the white copy, and then they hung the yellow ones with clothespins on a board. Every night, we would tell them: “If you have done what you put on your sheet of paper, come on up, find your paper, stand in line.” They would share their name and what was on their paper. Then we would do a countdown. When we reached “one,” they would take their paper and rip it up.

The first night there were maybe four students. And then it doubled or tripled every night after that. There was this celebration of seeing that God is present and at work. And when we say “yes,” and when we put ourselves in a position to move in the Father’s will, we can find victory. We can know that he is moving and he is present. So it was just helping them celebrate how good that feels.

JK: Back to the topic of the wide age range in this group. Eleven-year-olds at camp with 18-year-olds. How did that work out?

MD: Each morning, everyone would pick a name randomly, and then they would have to find that person, ask them their prayer request and pray for them right then and there. So prayer was a big part of it. Some students had never prayed out loud before, especially with someone either of a different age or gender. Some of these sixth graders were praying for adults.

JK: Which has not usually been the traditional approach for youth ministry, right?

MD: Not always. Here at First Free we’ve had combined worship, combined games, combined series at times, and bigger events like Color Wars and Unite. But that’s biblical, right? Like Paul and Timothy. So many times I hear things like, “Eeeew, middle school!” No. You were there once. They have value and you can invest in them, because that’s what Christ calls us to do. Take yourself off the pedestal. You don’t belong up there. That’s only reserved for the Father. And try to engage with someone younger than you. Remember what it’s like being younger and looking up to those high-school students.

JK: That’s so countercultural. Did you see it progress through the course of the week?

MD: Yeah, we did. And I think the dynamic between Clayton and me is unique, too. I’ve known Clayton since he was a junior in high school. So many times, students would come up to us and say, “You guys are like brother and sister.”

I think when something is modeled for someone, it’s caught rather than taught. I could teach someone until I’m blue in the face what it means to be super-relational. But when they see it manifested and actually happening, that’s when it becomes alive to them.

So we encouraged it. We had games where we didn’t pit high school against junior high. It was all a mix. And then we saw toward the end of the week that high school students were sitting at tables with middle school students. It wasn’t just these pods of “Oh, this is the high-school table.”

JK: That kind of approach must have made quite an impact on the students.

MD: It was beautiful. And we saw life transformation. There were a few students who got off the bus on Friday different from when they boarded on Monday. Because they said “yes” to Jesus. They said “yes” to what was being taught. They said “yes” to allowing the Father to invade their soul and mold their heart. And when you say “yes,” God is God, and he’s going to do miraculous things.

For instance, the presence of one student changed from Monday to Friday. She was dark and down on herself and labeling herself. Antisocial, hoodie pulled over her head. By Friday, she was beaming. The hood was down and the confidence was there. She didn’t claim those things of the world over her. She claimed the truth of the Father over her and it set her free. And it was because she said “yes.”

In Part 2, we talk about particular opportunities and challenges in student ministry today.