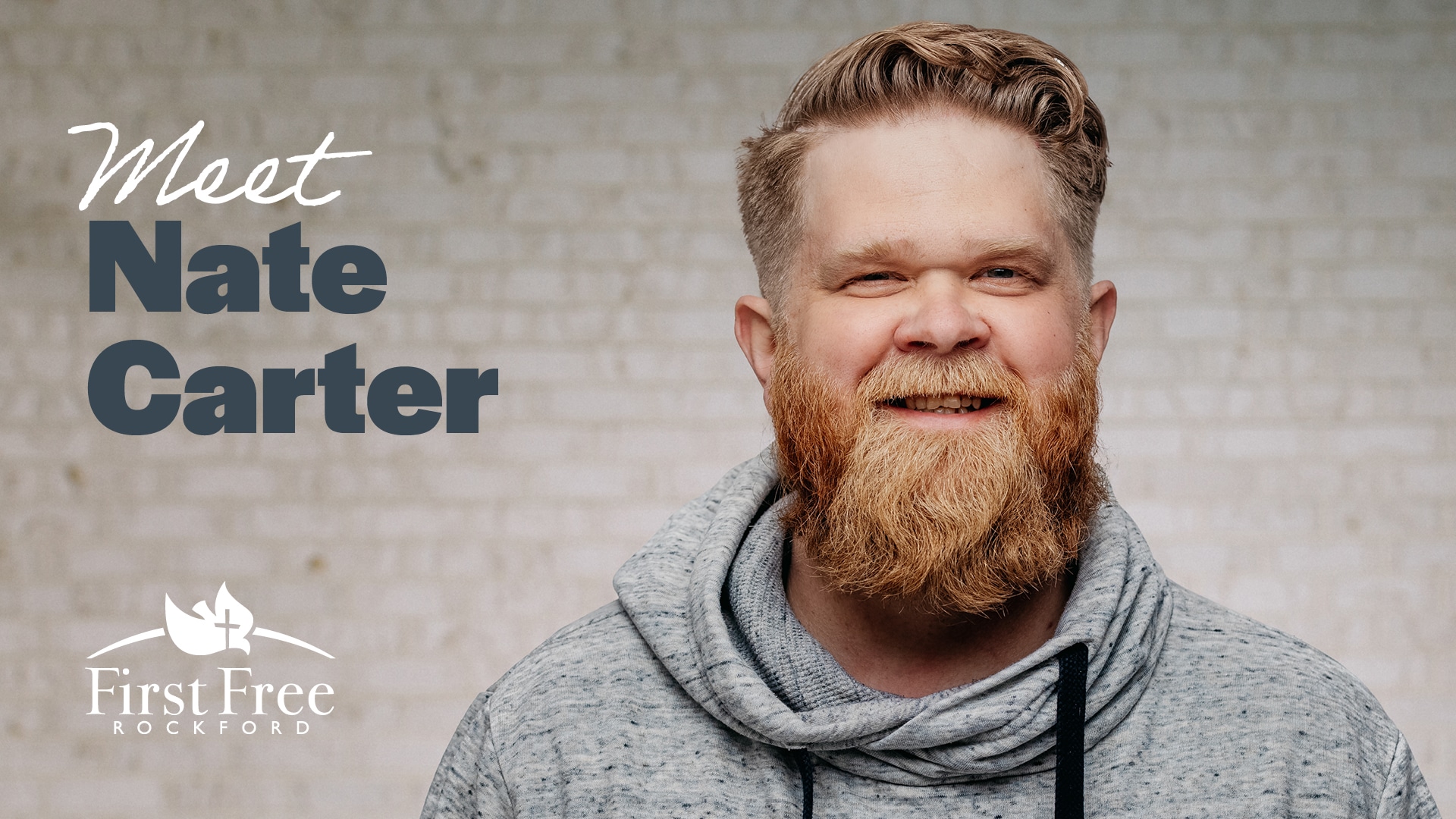 Picture this: A military intelligence unit finds Bigfoot’s nest. They steal his baby, intending to turn it into a secret weapon. Bigfoot intervenes and … well, things get messy.

Now another scenario: A man is swimming in the ocean off California when he’s bitten by a shark that escaped from a lab. Whenever there’s a full moon, he becomes a “wereshark” — something like a werewolf, but half man, half shark.

“Those are the two films I want to do — Bigfoot Apocalypse and Wereshark,” he says. “I think they belong on the Sci-Fi network because they’re not great. And those lead to my dream movie, which is Wereshark vs. Bigfoot.”

Talking with Nate, you’re never really sure where his wild imagination meets reality. What might sound far-fetched coming from someone else suddenly sounds entirely believable.

Here are the basics: Nate, 41, started working at First Free in October 2020. He’s been a Christian as long as he can remember, growing up attending Open Bible Center in Loves Park, the building that now houses Redeemer Church. He’s single. He lives with Type 1 diabetes. He loves making videos.

Now the good stuff. Once while camping in Zimbabwe, Nate and some friends built a wooden raft to cross a shallow river, in order to eat breakfast on a sandbar. Once they’d crossed, they looked back to see a troop of baboons destroying their tent. Meanwhile, their raft floated away.

“That moment was great, and it was ridiculous and dangerous,” Nate says. “We waded back across the river, but I was worried about crocodiles.”

On a mission trip to a Navajo reservation, Nate and another friend were cursed by a witch doctor. This was a year and a half before he found out he had diabetes. He doesn’t claim one caused the other. He just puts it out there matter-of-factly.

He once shot video for a team who brought Christians from a restricted country into a neighboring country, gave them biblical training and helped them sneak back home.

He thinks he may have saved John Kerry’s life in 2004. Yes, that John Kerry. A friend asked him to check on another friend. “She was freaking out about something,” Nate recalls. Turns out, a man in the apartment next door had accidentally fired his AK-47 rifle into the wall, then asked his neighbor not if she was OK, but if she had called the police.

“That told me we needed to call the cops,” Nate says. Authorities arrested the guy and confiscated guns, knives, bomb-making materials and a list of famous people he intended to kill, including top Democratic politicians, possibly at the party convention later that year.

The thing is, once you’ve spoken with Nate for a while, none of this sounds implausible.

“I have a knack for running into interesting people,” he says. “Meeting strangers and talking. You learn the pulse of everything, and it feels good to do that. I’m always down for an adventure.”

Nate creates the videos shown during worship services and on the website, and also works with lighting, sound and video production. He first learned video almost 20 years ago while studying at an Assemblies of God Master’s Commission school in Sacramento, Calif.

“It was something I was good at, at a time when I didn’t know what else to do,” he says. “It was fun, and it was a trend that I knew was only going to grow.”

Though he’s made a career of producing videos for churches and ministries, he’s also still thinking about that future movie gig. If Hollywood says “no” to Wereshark vs. Bigfoot, he has a backup plan: a film where Abe Lincoln and John Wilkes Booth meet in the afterlife and save Christmas together.

“I haven’t figured that out yet,” he says. “Either aliens or commercialism.”

“I like the idea because it’s so ridiculous. Ridiculous is fun. I think people need to have more fun. Good, clean fun.”