MINUTE READ
Reflection
Accept no substitutes
Looking for an Easter week meditation that includes Palm Sunday, the Chicago Cubs and the Book of Revelation? We've got you covered.
Jim Killam
March 31, 2021 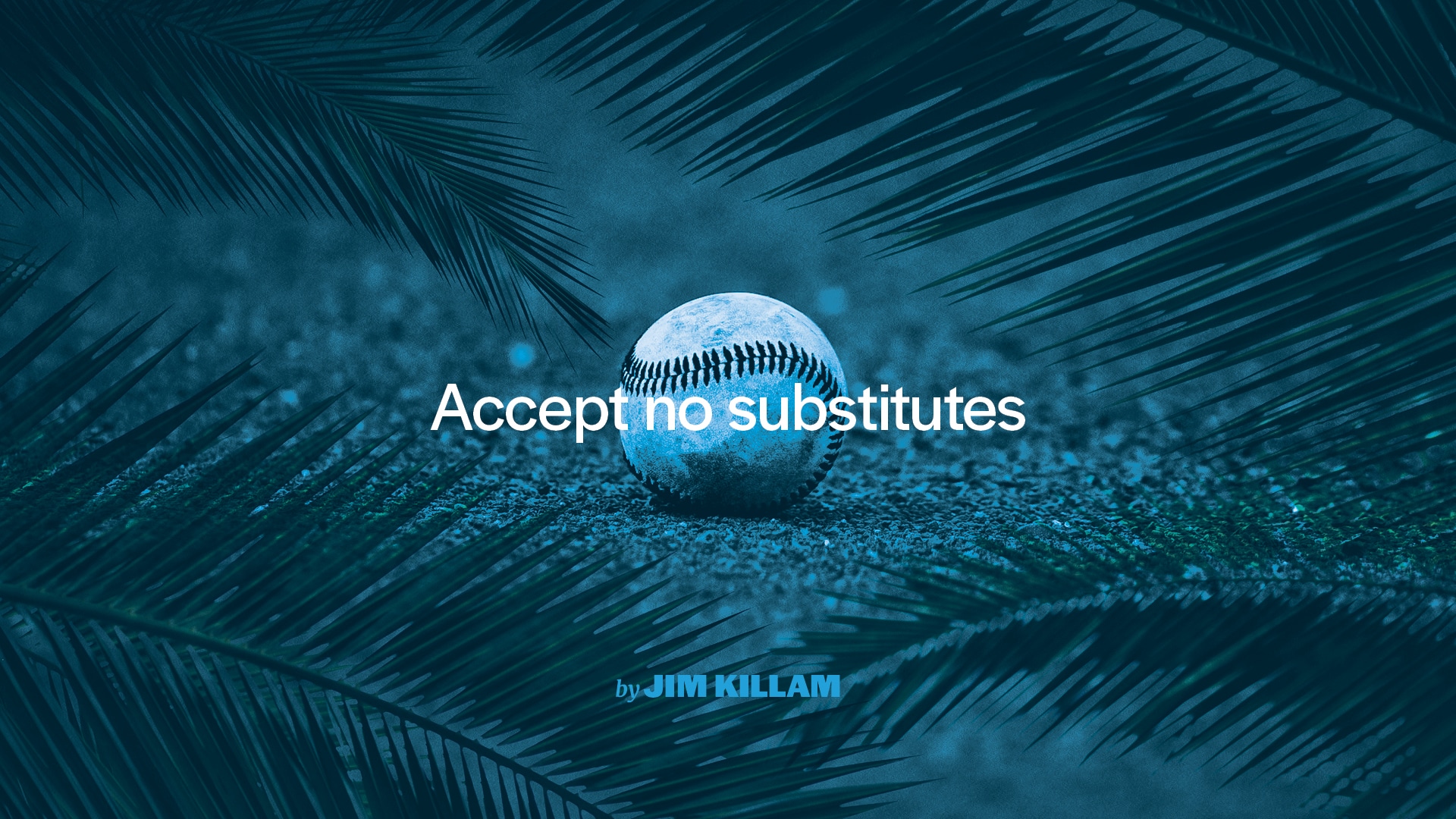 May he give you the desire of your heart
and make all your plans succeed.
May we shout for joy over your victory
and lift up our banners in the name of our God.
May the Lord grant all your requests.

Quick: What was the second-largest peacetime gathering in American history?

You might have even been there. It was only 4 ½ years ago, in Chicago. Five million joyful people showed up. That’s because at 11:47 p.m. on Nov. 2, 2016, we didn’t have to wait for next year anymore. The Cubs broke the longest championship drought in sports, finally winning the World Series after 108 years of futility. Cub fans wept openly — some at the graves of parents or grandparents who never got to see it happen. My 29-year-old son Ben, whom I took to his first game when he was 6, called me at 11:48. “I can’t believe it really happened.” He was crying. So was I.

Lauren and I lived in Texas at the time, and the fact that I came to work the next day with a “W” flag draped around my shoulders mostly just confused people. I told them it stood for Wycliffe. Then we started seeing pictures of random people all over the world waving “W” flags — replicas of the flag that flies over Wrigley Field after a Cubs win.

The parade happened two days later. At the time, it was called the seventh-largest gathering in human history. It wasn’t, but it did make the list. Even if we couldn’t be physically part of that multitude in Chicago, all Cub fans were there in spirit.

Weird, right? Millions of people, Christians included, rejoicing over a baseball victory. Why can’t we have that kind of passion about eternal things?

I think we do, and I think this seemingly trivial sports story points to it. Every good story and every human passion are about something deeper than they admit — and they usually contain echoes of the gospel. We long for the last to be first. We suffer now, knowing that one day all will be made right. We long for death to be swallowed in victory. Tell me that being a lifelong Cubs fan, and finally raising that ultimate “W” banner, didn’t provide a tiny glimpse of what’s coming.

And when countless multitudes gathered in joyful celebration, it wasn’t such a stretch to think about Revelation 7:9 and that vast crowd, too great to count, from every nation, tribe, people and language, standing before the throne and before the Lamb.

The Cubs’ moment of triumph was nothing close to eternal, of course. By the next season they were breaking my heart again. Whenever I get too wrapped up in my own expectations of earthly victories, I end up realizing they are cheap imitations.

I thought about sports victory parades during Pastor Luke’s Palm Sunday sermon. The significance of palm branches in the Bible extends back to the Festival of Tabernacles celebrating Israel’s delivery from slavery. Hundreds of years later, at Jesus’ triumphal entry to Jerusalem, people brought palm branches. It was what you did to celebrate a huge victory.

Yet, the crowd celebrating Jesus’ arrival was about to be bitterly disappointed. Their definition of victory looked nothing like what played out in the next week. By the end, many turned against the man they hoped would defeat Rome and carry them to political power. Maybe they felt duped.

Which makes think about how, then and now, our human desires can go terribly sideways. We can get caught up in worship of God, and not even realize that what we’re worshiping might just be our own idea of who God is or what he should do. We can get unwittingly caught up in idolatry — political leaders, financial prosperity, even sports teams — and be completely waylaid when an election doesn’t go our way, our money evaporates or our team loses.

Seemingly good things have the greatest potential to become idols because they can appear to fit inside our Christian worldview and still become our ultimate pursuit. Then when things don’t go as we think they should, we feel shattered. Disappointed with God or even angry with God. Duped.

At least for me, the Cubs reveal a third path. They are an interesting distraction, but they also remind me that I tend to think too small. Sure, that glorious moment from 2016 meant something deep, but it wasn’t about baseball. Our passions, properly tended and placed before God, point us to something C.S. Lewis wrote about: sehnsucht. It’s a German word that means being homesick for a place we’ve never seen. The now and not yet. Your whole world changes when you recognize those longings for what they really are.

There’s more to that heavenly scene in Revelation 7. Something familiar, maybe even unexpected, ties our earthly longings together with the climactic moment of all history.

They were wearing white robes and were holding palm branches in their hands.  And they cried out in a loud voice:

“Salvation belongs to our God,
who sits on the throne,
and to the Lamb.”

Palm branches. The ultimate “W” banner—the one we really seek. Finally, all of those longings make sense.

In the allegorical Narnia books, near the end of The Last Battle, Lewis gives the final word to a unicorn:

“I have come home at last! This is my real country! I belong here. This is the land I have been looking for all my life, though I never knew it till now. The reason why we loved the old Narnia is that it sometimes looked a little like this.”